I-Corps Teaches Teams How to Take Research to Market

Existing knowledge from patents can be used to create billion dollar businesses. Universities, like the University of Central Florida, have millions of dollars’ worth of innovative research that have yet-to-be-discovered market applications. In a Reuters article, IP analyst Bob Stembridge points out that, “Invention brings something new into being, while innovation brings something new into use. Innovation is the development of better solutions and products to address unmet market needs whilst maximizing returns for the organization.”

Taking inventions to innovation has the potential to revolutionize industries, improve standards of living and create jobs in local economies. So how can individuals explore the worth of patented research to bring innovations to market?

Let’s look at a group of student researchers at UCF who decided to patent their innovative discovery – a hydrophobic and self-cleaning nanostructure material. The team, Feynman Nano, believed that sheets of these nanostructures could be applied to solar panels to both reduce the cleaning time and increase panel efficiency. To determine if they had a viable business, the researchers participated in a program that teaches individuals how to validate their proposed market, UCF I-Corps. 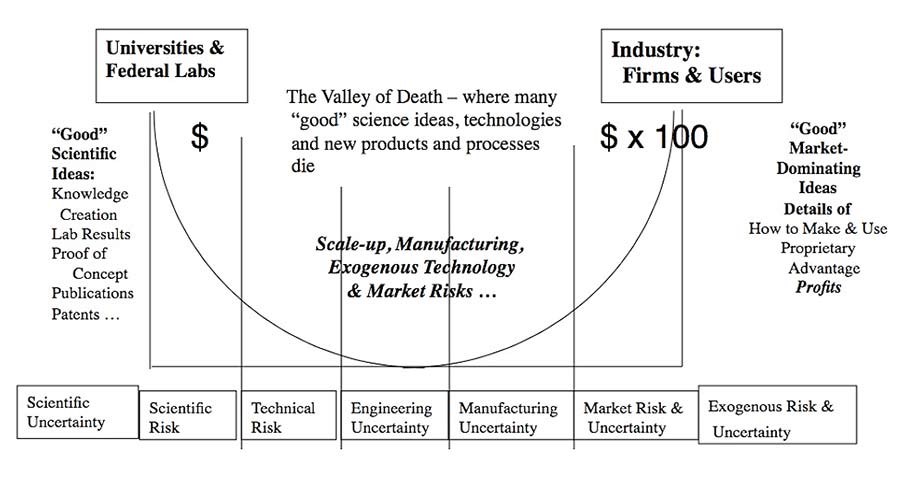 UCF I-Corps is funded by the National Science Foundation (NSF) to teach the process of starting a business through the Business Model Canvas (BMC). The BMC gets rid of the traditional business plan and focuses on conducting a series of hypothesis tests to validate assumptions before building a prototype or starting a business. In turn, this reduces the risk of falling into the “valley of death,” where 90% of startups fail. A survey of failed startups conducted by Forbes determined that “42% of them identified the ‘lack of a market need for their product’ as the single biggest reason for their failure.” Learning the BMC methodology has empowered Feynman Nano to survive the valley of death through understanding what they were building and for whom, before they built it.

During the 5 week I-Corps program at UCF, the team conducted over forty face-to-face interviews to gather data and validate their assumptions on their customer segment (the group that would eventually purchase their product) and value proposition (reason for purchasing the product). After receiving feedback from potential industry customers and the I-Corps teaching team & mentors they learned that although their customers wanted the technology, they did not want to pay for them to scale. Feynman Nano then researched residential solar uses for a self-cleaning application, but found the market wasn’t sophisticated enough to know it need their product.

To better understand where the technology could be scaled, they explored different options by “pivoting” their focus to various possible applications. Since UCF I-Corps provides seed money from the NSF, they were able to attend industry-specific conferences to meet potential customers and continue their search. After several rounds of pivoting, the team settled on an anti-microbial application for preventing healthcare associated infections.

As a result of going through the UCF I-Corps program, Feynman Nano now has NSF lineage (which means they can apply for exclusive NSF grants) and a 60% increased chance of obtaining SBIR/STTR funding. Since their graduation, they have applied to the National I-Corps program, where, if accepted, they will receive $50,000 in seed funding. Feynman Nano was also accepted in to one of the most prestigious accelerators in the world with a 2% acceptance rate, Y-Combinator.

“Innovation drives the economy, but much of the new technical knowledge required for such innovation is contained only in patents. The U.S. patent database is the world’s largest encyclopedia of technology improvements and technology experts in the world.” – Jay Walker, Wired

Countless stories like this can be found and are waiting to be discovered. Between 2012 and 2014, UCF spent more than $433 million dollars in research expenditures and has hundreds of patents waiting to be tested in the market. UCF I-Corps has been proven to increase a startup’s probability of success and reduce the probability of failure. So if you either own a patented technology or are looking to license a patent to create a company, why not increase your chances of success by going through UCF I-Corps?

For more information about the I-Corps program, contact Vanessa Zabala.

Take your Innovation to Market
Scroll to top